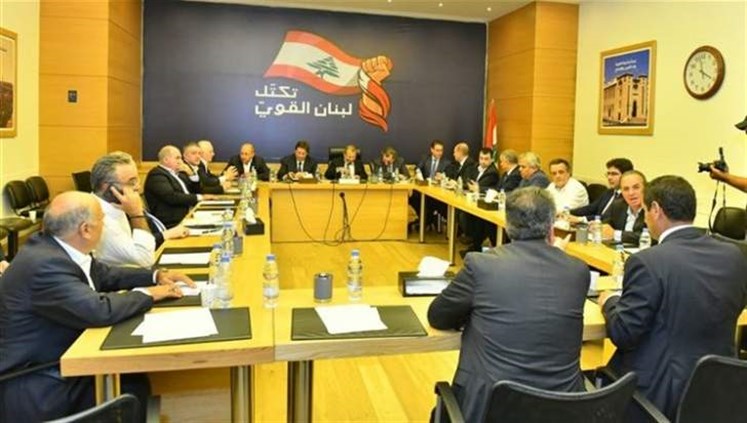 The “Strong Lebanon” bloc met under the chairmanship of MP Gebran Bassil and following the discussion of its agenda, issued the following press release:

1 – The Bloc stresses the need for the interim government to comply fully with the Constitution, in regard to the limitation of its prerogatives to the dispatch of day-to-day business only, while refraining from holding meetings of the government or take any other unconstitutional action.

The bloc warns against any tendency to consider the functioning of the state possible in the absence of a President of the Republic, which will be seen as a kind of normalization of abnormality and extension of the vacuum of the first constitutional post. Therefore, the bloc reiterates its total rejection of any attempt to grant the interim government the powers of the President of the Republic.

The bloc asserts that, in its last legislative session, the parliament confirmed that the interim government will not exercise by proxy the powers of the President of the Republic, with a commitment to this effect from the interim Prime Minister during the same session.

2 - The bloc considers that the attack which targeted young people and students of the Free Patriotic Movement on the set of MTV, followed by a multitude of aberrant media reactions emanating from the latter and not very innocent political positions, clearly reflects a blatant intention to renew the campaign of defamation programmed against the party, by demonizing it and exposing it as being an armed militia while it constitutes the party of the people who are under to the law, the legitimacy as well as the state of the institutions.

The bloc warns the people in question that those who have resisted in the face of the most difficult circumstances will not succumb to blackmail or threats. Moreover, reviving the circumstances of October 17 is unacceptable in terms of targeting a sovereign party, guardian of a project and a long path traced by President General Michel Aoun. Consequently, the Bloc calls on the parties working to pit it against the Lebanese army to refrain from doing so, since any confrontation between the army and the party, born from the bowels of this institution, is impossible and will never take place; the army is and will remain the pillar of the nation and the guarantor of its unity, independence and sovereignty.

In any case, the Bloc asks the TV station to broadcast as soon as possible the recording tapes which show the facts as they are without hiding behind futile pretexts to try to make them disappear. The bloc awaits the outcome of the case, currently in the hands of the Public Prosecutor of Cassation, and asks him to carry out all the necessary investigations, to define the responsibilities and to indict the ones deemed responsible. Under no circumstances will we agree to cover up the affair, which will only increase our suspicions of a conspiracy by certain parties against the party.

3 - The bloc considers that it is doing everything necessary to facilitate the election of a President of the Republic in application of constitutional norms, even if the fact of looking for the right candidate for this period requires dialogue and communication and a serious discussion between the different parties, however the bloc is by no means ready to participate in any attempt to waste time in order to serve the interests of any other party for populist ends.

The bloc reiterates that the sole purpose of the blank vote was and still is to make room for consensus and not to perpetuate failures. Also, the block will not get into the game of presenting names in an anarchic way. Thus, the parliamentary blocs are invited to meet us halfway and respond to the paper of presidential priorities that we have drawn up for them in order to nominate candidates capable of having, by their person, their righteousness and their history, the expected profile that will occupy the first position at the head of the state.